Second part of a two-part blog post written as part of the 2019 Park Leaders Development Program.

Every public servant has a role in advancing reconciliation with Indigenous Peoples. This includes a commitment to making sincere and meaningful changes to the way we engage with communities, manage park lands, and consider opportunities to co-create solutions together.

The concept of Indigenous involvement in park vegetation management, specifically in prescribed burns, needed a closer look.  Through conversations with CPCIL participants, it was discovered that Alberta has been conducting inclusive engagement for Indigenous involvement in prescribed burns.  It is still in the early stages of engagement but it serves as a good example of communication, relationship building, and cooperation.

Scott Jevons, an alumni of the 2007 CPC Park Leadership Program who works with Alberta Environment and Parks, Kananaskis Region, shared some of his experience working with local Indigenous communities on consultation and engagement regarding prescribed burns in provincial parks.

Alberta’s Evan-Thomas 10-year Vegetation Management Strategy involved consultation with several local Indigenous communities.  Following the formal consultation, Stoney Nakoda First Nation wanted to remain engaged and active in park management. As stated on their website, the Stoney Nakoda are the original “people of the mountains” and have been actively involved in park management decision making.  For example, Stoney Nakoda wish to be notified prior to prescribed fires so they may gather medicinal plants or perform a traditional ceremonies.  And in 2017, in Evan-Thomas Provincial Recreation Area, they conducted a traditional ceremony before a prescribed burn.  They also have had specific requests such as delaying a burn due to a study that they were conducting in the area.  Having this level of communication with the community, Alberta Parks was able to adjust their management to meet both their needs.

Has Alberta Parks run into any challenges?  Scheduling can be difficult.  When conducting a prescribed burn, conditions such as soil moisture, vegetation, and weather need to be assessed on a day-to-day basis.  It can sometimes be difficult to offer substantial notice prior to a burn.  However, Alberta Parks have been doing their best to provide the most advanced notice as possible.

Any other challenges? Any other opportunities? Could other jurisdictions adopt a similar approach of engagement?  Alberta Parks is continuing to build stronger relationships with Indigenous communities and get a better understanding of Indigenous traditional knowledge and incorporate this into their planning.  The engagement of Alberta Parks with the community has proved beneficial for both groups.  What other mutually beneficial relationships could be developed across the country?

Join the discussion in the comments section below. 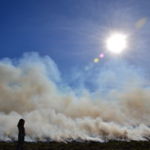 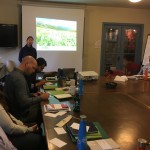