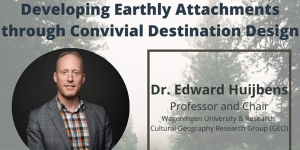 This webinar focuses on the ways in which tourism can contribute to solutions of the current climate and biodiversity crisis through destination design centred on earthly attachments and conviviality. Drawing on a recent publication on Developing Earthly Attachments in the Anthropocene (Huijbens, 2021) and unfolding research on convivial aspects of tourism planning and design, the webinar will explain these terms and theoretically underpin them, whilst also providing examples of the ways in which this type of design can unfold in practice. The webinar then ends with thoughts about how this can benefit future development of tourism in the context of climate change and biodiversity decimation.

EDWARD H. HUIJBENS (b. 1976) Geographer, scholar of tourism, professor and chair of Wageningen University cultural geography research group. Edward finished a B.Sc. in Geography at the University of Iceland in the spring 2000, MA and later a PhD in Cultural Geography mid-year 2005, both at Durham University, England. In 2004 – 2006, along with completing the PhD, he taught and did research at the University of Iceland, both in the faculty of science and the faculty of economics and business administration. From 2006 – 2015 he directed the Icelandic Tourism Research Centre and developed a holistic research agenda for tourism during a period of the industry’s exponential growth in Iceland. From 2015 till 2019 Edward was a professor at the school of social sciences and humanities at the University of Akureyri, where he also served as department head for the faculty of social sciences and law from 2017 till February 2019. Beyond regular academic mentoring and course teaching Edward has taught twice on the prestigious programme Semester at Sea, run by the Institute of Shipboard Education from the US, autumn 2016 and autumn 2018. On the latter occasion he ran Global Studies, the course all student aboard are required to attend. Edward is the author of over 40 articles in several scholarly journals in both Iceland and internationally and has co-edited Technology in Society/Society in Technology (2005, University of Iceland Press), Sensi/able Spaces: Space, art and the environment (2007, Cambridge Scholars Press) and The Illuminating Traveller (2008, University of Jyväskylä), Tourism and the Anthropocene (2016, Routledge) and is one of two authors of the book Icelandic Tourism (Forlagið, 2013). Edward most recent book Developing Earthly Attachments in the Anthropocene was published in April 2021 by Routledge.