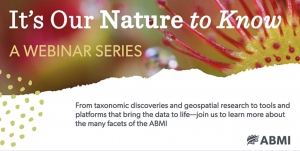 From taxonomic discoveries and geospatial research to tools and platforms that bring the data to life, join us to learn about what we do!

Welcome to the It’s Our Nature To Know Webinar Series!

In the fourth episode of our webinar series, ABMI taxonomist Rob Hinchliffe discusses the ABMI’s aquatic invertebrate research, and why collecting data on aquatic invertebrates in the province is important to Albertans and helps to support land-use decision making.

Join the next episodes of the series to learn about mosses, and BEYOND!

Alberta is home to more than 80,000 species including plants, animals, arthropods, bacteria, fungi, and algae. At each location, we collect data on both terrestrial and aquatic ecosystems. We also track changes in habitat structure and human development. Over the years the ABMI’s values have not changed: we deliver scientifically credible, value-neutral, independent, and publicly accessible data. Our purpose is to inform government, industry, environmental communities, First Nations and the public about what is happening in our environment so that they can make informed decisions and plan for the future.