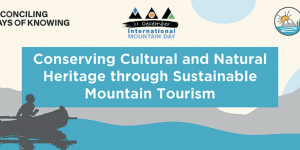 Join us on December 9 for an International Mountain Day event: “Conserving Natural and Cultural Heritage through Sustainable Mountain Tourism”

In 2003, the United Nations designated International Mountain Day as a day to create awareness about the importance of mountains to life, to highlight the opportunities and constraints in mountain development, and to build alliances that will bring positive change to mountain peoples and environments around the world. Learn more about International Mountain Day here.

The panel discussion will be followed by a Q&A period during which participants will be able to ask questions of the panellists.

We are pleased to be able to offer complimentary registration for this event.

Kii’iljuus is the Kuuljaad (“boss woman”) of an ancient clan, St’awaas Xaaydagaay (Cumshewa Eagle clan), of the village of HlKinul. She worked for over thirty years in various capacities and departments within the federal government of Canada. She was also the Cultural Liaison for Gwaii Haanas from 1989 until 2012 and holds a Master’s Degree in Education from Simon Fraser University.

Kii’iljuus lives her passion in guiding youth, sharing knowledge, conducting research, and engaging in discussions with those who are interested and want to make a difference for the next generations. Her areas of interest are governance, laws, oral histories, and traditional ecological knowledge and she is a sister, mother, grandmother, great-grandmother.

Brenda Holder was born and raised in the Rockies in Jasper National Park and is pleased to follow her lineage as a traditional Cree/Iroquois Métis guide from the Kwarakwante of Jasper. She is a Master Interpretive guide and is an active advocate of Indigenous Tourism

Brenda has spent the last 22 years in tourism and has served on Aboriginal Tourism Advisory Boards for the Minister of Tourism Parks and Recreation in 2008 as well as for Travel Alberta in 2006. In addition, Brenda has been engaged in Aboriginal Tourism since 1998 and was an active member of Niitsitappi (before being taken over by Travel Alberta).

Brenda is a Master Interpretive guide and is an active advocate of Aboriginal Tourism. Her two main passions are Traditional Medicine and beadwork. She has also been awarded the Aboriginal Woman Entrepreneur Award of Distinction, the Esquao Award from the Institute for the Advancement of Aboriginal Women (IAAW), and the Métis Entrepreneur of the Year award.

Brooklyn Rushton is a PhD Student in Geography and Environmental Management at the University of Waterloo living and working in Jasper, Alberta. Her research is deeply rooted in community-based and collaborative research methodologies to reimage nature-based tourism and recreation in Canada’s protected areas and public lands. She holds a Masters of Climate Change from the University of Waterloo and a Bachelor of Science from the University of Guelph majoring in Wildlife Biology & Conservation. Brooklyn is also a Knowledge Mobilization Intern with the Resilience Institute working on climate change adaptation and mitigation education and research.

Isabelle is a student, researcher and proud mum. She is both a geographer specializing in tourism and a professor of tourism and social development at the Université du Québec à Trois-Rivières. After completing a Master’s Degree focused on the values of sustainable development in Quebec’s national parks, Isabelle began work on her doctoral thesis which looks at innovation in nature-based tourism. Specifically, her research is interested in tourism in protected areas and natural environments, tourism in mountain areas and the concepts of innovation and authenticity applied to tourism.

Isabelle’s past experience as a designer and manager of snow parks and ski resorts deeply influence the way she teaches and researches important mountain topics.