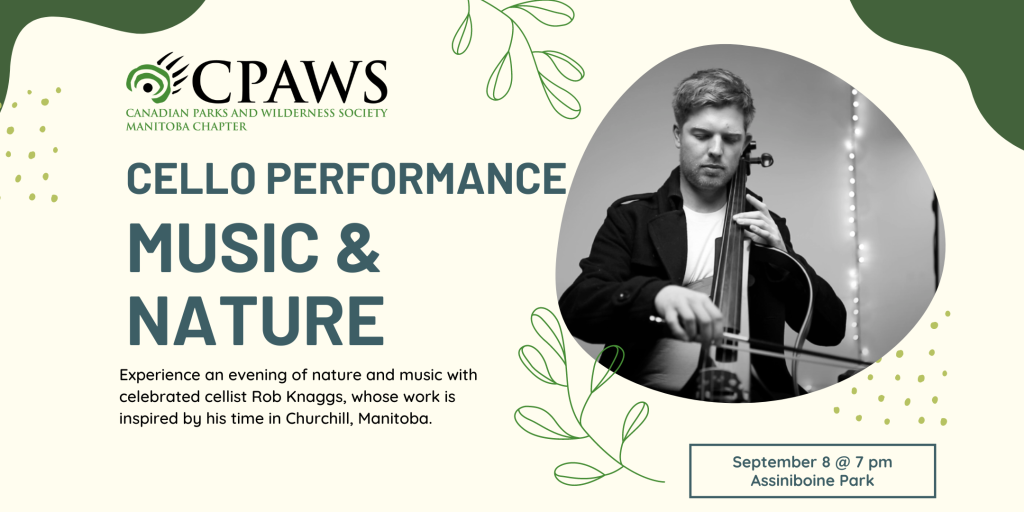 Experience an evening of nature and music with celebrated cellist Rob Knaggs, whose work is inspired by his time in Churchill, Manitoba.

Bring a lawnchair or cozy up on a blanket and join us at Assiniboine Park for an intimate performance by cellist Rob Knaggs. Knaggs’ evocative performance will be enhanced by a stunning visual display of Canada’s north, recounting his years spent living in the town of Churchill, Manitoba.

“I’ve been lucky enough to spend time in this isolated corner of the world where I’ve seen wild polar bears eye to eye; I’ve gone out in a boat and played music to whales, only to have them follow us and vocalize back. I wanted to capture my experiences and memories from there and put them into a show that transports audiences to a magical place through sight and sound” – Rob Knaggs.

Knaggs’ performance will feature a curated visual accompaniment, The Wild Responds, an immersive and transcendental experience showcasing the beauty and fragility of an environment endangered by a warming climate.

Taking influence from the allusive ethereality of Bjork and the epic orchestrations of Arcade Fire, Rob Knaggs runs his cello through an array of effects and loop stations to compose his spine-tingling works. Recorded at Collector Studio in Winnipeg, MB, and mastered at Sigur Ros’ home studio Sundlaugin by Birgir Jon Birgirsson, Rob’s latest EP, Foreshore, showcases a performance of cinematic soundtrack and shimmering post-rock, from the bittersweet lilts of Kallie, the rumbling abrasion of Ghosting, to the final haunting howls and textures of A Natural Response, a work inspired by his performances with the beluga whales while living in Churchill, Manitoba.

In Person
Category
Other Programs