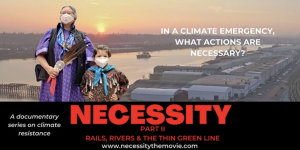 Film focussing on resistance to fossil fuels and oil-by-rail climate justice actions in the Pacific Northwest for viewing Dec.16-Jan.1st

J Haaken Productions, a Portland-based documentary team, invites the community to a screening of “NECESSITY II:Rails, Rivers & the Thin Green Line”— the just completed second film in their documentary series, this one set in the Pacific Northwest. This virtual event is hosted by Extinction Rebellion US (the Portland XR Chapter is one of the groups featured in the film) and proceeds will benefit a Climate Justice Legal Defense Fund and the educational mission of the NECESSITY film series. Attendees have the opportunity to enjoy watching the film with families and friends via a private one-time screening link available for a donation. Suggested donations for this fundraiser event are at least $10 per person. Please be generous as we urge ticket buyers to give what they can above the recommended donation and to schedule additional viewings. If you enjoy the film, please help us spread the word by creating a buzz and sharing the Eventbrite link with others. Ticket holders are entitled to a single viewing anytime within the timeframe starting early Dec. 16th and going up until midnight on January 1st. Check out the trailer below! We appreciate your support!

Much like Part I, NECESSITY II is guided by Native perspectives and weaves into the film dramatic regional sites where people are fighting fossil fuels. The film continues the story of activists enlisting the Necessity Defense, this time in a precedent-setting jury trial in Oregon after an Extinction Rebellion direct action at Zenith Energy in Portland. This story of climate resistance in the Pacific Northwest brings into view a historical landscape of tribal leaders, Indigenous activists, labor leaders, and white allies as they resist oil trains and terminals in the transport of highly toxic products through critical waterways and treaty lands.

More information about the NECESSITY project is available at the website https://www.necessitythemovie.com/ or follow on social media @necessitythemovie. Extinction Rebellion is part of a global collective movement working to catalyze creative mass actions pressuring for change on the scale necessary to address the catastrophic consequences of climate chaos as well as its impacts on Frontline Communities and ecosystems. A wonderful panel discussion of the film with many of the featured women leaders and the director is available at:https://www.youtube.com/watch?v=no9ArBTytcw.

Check out the trailer here