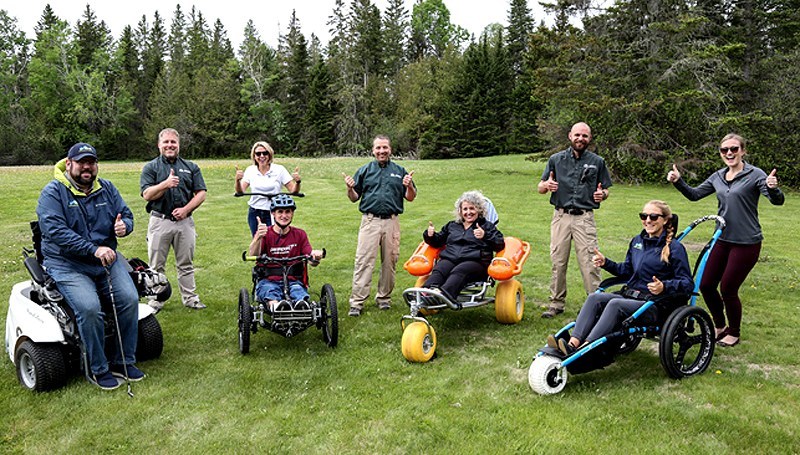 In 2005, I started work with NB’s provincial parks while finishing University and accessibility was starting to become part of the core curriculum around that time.  In 2007, I had the honour to attend the Parks System Leadership course (PSL, the precursor to the Canadian Parks Collective) which was held at William Watson Lodge in Kananaskis, Alberta.

My experience at the PSL course, but more specifically of seeing William Watson Lodge – a purpose built accessible wilderness lodge – first-hand set me on a course to replicate its core values here in New Brunswick. I told Don Carruthers Den Hoed while I was there I wanted to bring it to my province, and my principle since that time has been to promote free, self-guided accessibility throughout our parks system.

This year I got to realize a big part of my accessibility dreams  with the introduction of improved facilities and new equipment in our provincial parks and a statement from our Minister of Tourism, Heritage and Culture that “All New Brunswickers deserve access to high-quality physical and recreational activities. I am delighted that our parks offer better access to people with limited mobility and physical disabilities, as well as new equipment, so they can enjoy nature and experience more of what our parks have to offer on the beach, in the water or down the mountain.”

Upgrades to administration offices, including accessible washrooms, campsites and cabins  and the introduction four Hippocampe wheelchairs, three WaterWheels floating beach wheelchairs and one adaptive mountain bike – the Bowhead Reach – are available this year (2019) in NB provincial parks, free of charge.

Bringing the Bowhead Reach bike to NB was icing on the cake though. I had the privilege of meeting its inventor – Christian Bagg – at another CPC led initiative, the 2016 Canadian Parks Summit in Canmore. This incredible piece of equipment and Christian’s story of determination to lead his own adventures inspired me to try and bring him and the bike to NB.

Josh, a Para-Olympian,  you see on the second bike from the left in the photo above had never heard of the bike before, much less had he been able to explore the trails at the park at his doorstep. Before we got underway with the photo shoot he’d volunteered to help us with, we gave him some time to ‘play’ and get used to the bike. I took him out on the trails and inevitably there were a couple of trees across the path. I managed to lift one enough for him to get out under, but couldn’t budge the other.

Josh was immediately trying to figure out how to backup and I could see a bit of disappointment on his face – this was supposed to be an milestone where he’d have freedom of choice  – and then I clued in and said “just go over it”… Josh  -“Really???… Me – “you bet!”. After that it was a full on sprint for me to even consider keeping up and I’m sure his smile was wider than the handlebars for the rest of the day.

Thank you to the CPC and my NB team for affording me the privilege of meeting park leaders from across the country. It’s given me some of the proudest moments of my life and now we’re getting to inspire a new generation of park lovers, one self-guided adventure at a time!