After several weeks of pre-residency work–preparing solo presentations on economic challenges facing park agencies and posting reflections on a leadership article and a CPC financial sustainability video–21 Park Leaders from across Canada gathered in Canmore Alberta for the first residency of the Canadian Parks Collective for Innovation and Leadership.

Hosted in the Alpine Club of Canada Clubhouse for the week, the group gave presentations, collaborated on capstone team projects, and built networks that will last beyond the program. Workshops throughout the residency included:

While evenings were free for networking, there were two memorable events, including a fireside chat with CPC Park Leadership alumni Peter Swain, Nadine Spence, and Kathie Adare and an informal conversation with Acting Parks Canada General Director, Michael Nadler.

In addition, the group participated in two field experiences, the first focused on innovative approaches to economic sustainability, and the second built around the idea of contributing to the park community, as the CPCIL Park Leaders is tended to local challenges and provided feedback for park managers and programmers. The former included a trip to the Calgary Zoo to explore their visionary approach to becoming Canada’s leading wildlife conservation agency and a stop at Glenbow Ranch to explore private land conservation and other effective conservation mechanisms with Guy Greenaway from the Miistakis Institute. The latter included a site tour of the Canmore Nordic Centre Provincial Park, a visit to the Peter Lougheed Discovery Centre in Kananaskis Country, and a stop at the Morley Artisans Flea Market. In all cases, the hosts appreciated the conversations and ideas generated by the Park Leadership Development Development Program participants.

Having returned home from the Rocky Mountains and to the reality of daily work, all the participants are focused on their solo tasks–working with the program facilitator to create outreach projects to bring leadership learning back to their home agencies–and their capstone team projects. These projects reflect collaborative approaches to looking at parks in new ways and aim to do things such as

Capstone projects are expected to be complete by mid April and will be posted on the park leaders development program page. 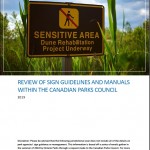