With the longest coastline in the world and a motto of A Mari Usque Ad Mare or “From Sea to Sea,” Canada has a vested interest in protecting its marine resources. Fourteen Marine Protected Areas (MPAs) and 4 National Marine Conservation Areas (NMCAs) have been implemented to preserve a healthy marine environment, support cultural and socioeconomic facets of local communities and the nation as a whole. This post is the first of a three-part series, highlighting a Canadian MPA from the nation’s three oceans – the Arctic, Pacific and Atlantic. For more information on what an MPA is, please visit this post.

In the remote, Artic tundra of Canada’s far north lies the country’s largest and northernmost protected area (both marine and terrestrial) in terms of surface area – Tuvaijuittuq, or “the place where the ice never melts” in Inuktut (1). Designated in August 2019, it encompasses a surface area of 319,411 km2 (larger than the entire land area of Italy) and is located on the northwest coast of Ellesmere Island, Nunavut, above the boundary of the Arctic Circle and just below the Geographic North Pole. It constitutes 5.5% of Canada’s ocean territory, bringing the total to 13.82% (2). That’s a big deal, considering that it’s implementation enabled Canada to surpass its goal to protect 10% of its ocean territory by 2020 after it became signatory to the United Nation’s Convention on Biological Diversity (UN CBD), or Aichi Target 11, in 2010 (1). It was also instrumental in achieving Canada’s national Marine Conservation Targets (3).

Situated in the High Arctic Basin of Nunavut (Figure 1), Tuvaijuittuq’s environment is locked in time, characterized by extreme cold, unrelenting winds, and the jagged mountain ranges and frozen cathedrals of the Arctic Cordillera terrestrial ecozone and the Canadian Arctic Archipelago/Arctic Basin bioregions (1) (Figure 2). The landscape is ethereal and almost unworldly, featuring mountain peaks protruding through blanketed valleys and buried under 900 m of ice (4). The glaciated peaks and polar ice fields paint an alien and unique scenery of the Canadian High Arctic. It is the land of the midnight sun, where the sun can remain visible for 24 hours a day from April to September, and is shrouded in darkness due to the  unearthly polar night phenomenon from October to February (5). The region’s distinctive geography and glaciology was instrumental in its designation of an MPA.

The ice found at Tuvaijuittuq is exceptionally unique, determined to be the oldest and thickest in the entirety of the Arctic Ocean (1). Research has dated the ice shelves in this area to be from the mid-Holocene, some 5,000 to 7,000 years ago (6). It is also the last stronghold of the Arctic’s multi-year sea ice, sourced by the Beaufort Gyre, and is expected to last the longest as climate change intensifies in the region (1). This has far-ranging and highly significant ecological implications for the unforgiving and seemingly desolate landscape. The barren nature of the geology gives the impression that it is devoid of life, but instead is astoundingly biodiverse. This all-year sea ice is projected to be a final oasis for the species dependent on it for habitat and survival, both on and under the ice (7). The Arctic marine ecosystem in this area comprises of walruses, seals, belugas, polar bears, narwhals (2), and microscopic algae (Figure 3), which provides energy for the entire food web (1). The seabed community is a lot richer and more diverse than formerly anticipated, important for the support of larger marine mammals. Because of this, the Tuvaijuittuq MPA is considered a globally significant protected area, designed to safeguard the prolific and dynamic High Arctic ecosystem.

The MPA is governed under the Ocean’s Act and co-governance plays a key role in its management (for more information on co-managed MPAs, please visit this post). Its establishment was a collaborative effort between the Government of Canada, the Government of Nunavut and the Qikiqtani Inuit Association (QIA), established through a memorandum of understanding (1). Scientific assessments of the MPA feature Inuit Qaujimajatuqangit, or Inuit traditional knowledge, passed on over millennia and encompassing beliefs, values and skills (8). All human activity is prohibited in the MPA for up to five years, besides:

The QIA hopes that this co-managed model with Indigenous groups be an exemplar of marine conservation going forward (9). The Inuit have long advocated for the protection of these areas for decades (10). PJ Akeeagok, QIA’s president commented on the establishment of the MPA and stated that, “When the negotiations started, it was in the spirit of reconciliation” (9). This indicates the new potential of parks and protected areas in restoring Canada’s relationship with its Indigenous communities and repairing its tainted track record, as parks have been historically used as a tool to drive Indigenous peoples out of their lands (10). 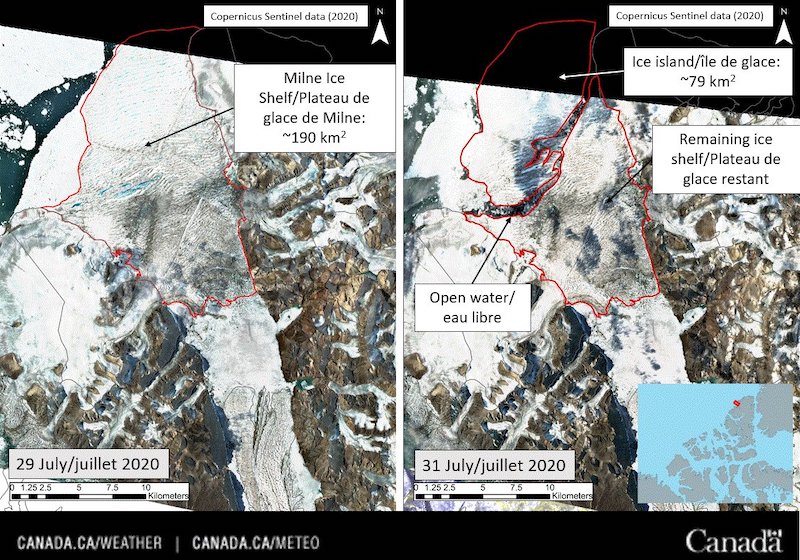 While protected, the region is not without its vulnerabilities. Arctic sea ice has been diminishing at unprecedented rates, and over the last three decades, the Arctic Ocean has lost sea ice parallel to the land areas of Manitoba and Quebec combined (1).This melting is witnessed by the Inuit first-hand, who practice their traditional hunting rights in the area. Climate change has always been a factor, but due to its unique thickness, government scientists predicted that the year-round sea ice in this area would not disappear until at least 2050 (10). They were then astounded to discover that less than a year later, in July 2020, radar imagery came back showing that nearly half of the Milne Ice Shelf, located within Tuvaijuittuq, had disintegrated into the ocean, resulting in a 79 km2 ice island 50% larger than Manhattan (11) (Figure 5). Warming in the Arctic is occurring at an alarming rate, twice as much as the global average (12). In addition to threatening the area’s wildlife, this melting of ice is also making the Arctic susceptible to jurisdictional conflict between countries as they dispute over once unpassable waters (9). Increased shipping activity, fishing, tourism, oil and gas, and mining is also a concern as the ice continues to shrink (13). Threats like climate change indicate that further measures, in addition to setting aside protected areas, are warranted to ensure the longevity of the Canadian Arctic. 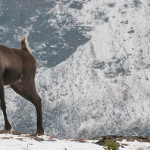 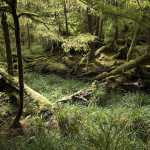