This post was written to report the work of Capstone Team G, one of the teams of Park Leaders involved in the Winter 2021 Park Leaders Development Program.

With the growing pressure of climate change, cultural and natural heritage sites in Canada’s parks and protected areas are facing continuously greater challenges. Parks leaders and stakeholders are having to problem solve on tight timelines, tighter budgets, and with the knowledge that many Canadians have a vested interest in the outcome of their decisions. Our capstone team was interested in understanding the challenges that come with making these decisions, and ways in which to simplify complex decision making processes.

Our interest began with wanting to explore both the natural and cultural impacts of climate change. Often, cultural landmarks are left out of the discussion when talking about the impacts of climate change on Canada’s landscape. However, valuable cultural sites, such as the centuries old Totem Pole stand at Haida Gwaii, are facing possible destruction as a direct result of rising sea levels. Important decisions are being made on whether or not to preserve these landmarks, and how to do so.

With this in mind, and the permission of Capstone Team A, we decided to update their infographic to integrate the RAD framework and include cultural resources as well as natural resources. We found the RAD framework could be tested using real conservation case studies. We also found in our exploration of decision making tools, that while many tools exist, few are tailored specifically to climate change, and even fewer address climate change as it relates to natural and cultural heritage sites. This is an area where little work has been done. We think that expanding upon this topic will not only be of interest in the future, but necessary to preserve, or accept the loss of, Canada’s natural and cultural heritage landmarks.

Decision making in Canada’s parks and protected areas will only get more complex with the increasing pressure of climate change. The infographic that we have created can contribute to park leadership by laying out a simple, yet effective method of working through difficult decisions. It also shows that these decisions do not need to be made in isolation. Many leaders across Canada are facing similar issues, and coming together to discuss seemingly impossible decisions will help foster a dialogue in which ideas can be shared, problems can be solved, and ultimately, responsible and tough decisions can be made.

Moving forward, we believe next steps could include:

The Winter 2021 Cohort of the CPCIL Park Leaders Development Program presented a unique challenge to all participants: connecting entirely in an online space during the peak of a global pandemic. This program typically presents plenty of challenges even when operating as usual: connecting with other park leaders from different parks organizations, all at different points in their careers, and with different worldviews and experiences. This year, none of our cohort ever got to meet each other in person!

How does a Capstone Team of four different people from four different parks organizations unite and find common interests? Fortunately for the Winter 2021 Capstone Team H, we were able to overcome the distance, time zones, and occasional technological issues to focus on one topic that we all care about: youth engagement in our parks and protected spaces.

In March of 2021 during our two-week eResidency, our group was thrown together and had to decide, through nothing but a series of creative team building activities and conversations, what we thought our Capstone Project might focus on. Our Capstone Team has representation from four different agencies: Parks Canada, Sépaq (Québec), Ontario Parks, and Alberta Parks. We spoke a lot about themes that were important to all of us: reciprocity (giving to and receiving value from parks); connecting (and reconnecting) people with parks and protected spaces; youth; and the inspiration we took from some of the amazing guest speakers we saw during the eResidency.

One common theme we were all able to identify from our individual journeys in Parks is that of youth involvement (or lack thereof) in parks and protected spaces. We all agreed that young people – whether they work for our organizations, recreate in our spaces, or just care about nature and the environment – are critical to informing the future direction of our organizations. We know that Canadian youth have valuable opinions about issues related to our parks and protected spaces, such as inclusion, diversity, accessibility, resource management, and visitation. We also know that youth have a desire to be involved in our organizations and spaces, but sometimes encounter barriers that deter them from engaging to the fullest. 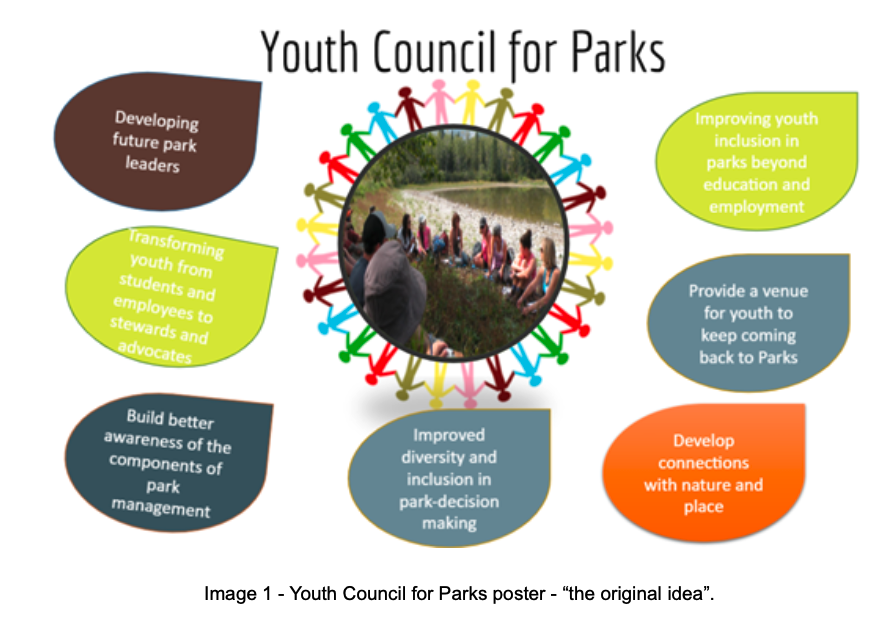 While the idea of a pan-Canadian Youth Council for Parks’ agencies was appealing, we realized very quickly that the scope of this idea was far too broad for us to tackle over a few months. Our team engaged in several thought-provoking discussions which led us to narrow our focus to a project that kept the core values and purpose of our initial idea but was much more manageable for our timeframe. We developed the following goal statement: Things would be better if parks agencies had a tool to keep youth more engaged with Parks’ goals and values, allowing current, former, and future/prospective youth workers to connect with one another and with mentors or other park agencies, share thoughts and ideas, and participate in meaningful projects and dialogue.

Our Capstone Team had a number of personal observations and theories as to why youth may or may not engage fully with parks’ agencies, as well as many ideas about how to connect and engage youth further, but we wanted to hear these thoughts directly from young people. We finally settled on developing a survey which could be administered to youth to assess youth values, concerns, and ideas surrounding parks and protected areas. With a limited timeline to prepare, launch, and evaluate survey results, our team created a short survey of 11 questions and distributed the survey within our networks. The survey was conducted from July 16 – July 26 and was intended to provide baseline results showing general trends.

When the survey period closed and we got a chance to look at the results, we were blown away by the quality and depth of responses. Respondents generally validated a lot of the initial observations and ideas that our Capstone Team had proposed, but also revealed deeper understanding of park issues and a greater passion for parks than we might have expected.

Despite respondents having self-identified as avid users of parks both personally and professionally, several barriers to their continued or increased enjoyment of parks and protected areas were identified. These included distance and accessibility, cost, time, overcrowding, and mistreatment by visitors. Many respondents are seeking improved job opportunities, career continuity, and improved accessibility to parks and protected area systems. Most respondents also clearly indicated an interest in having more opportunities to engage with other youth in parks and connect about jobs, training, and diverse work experiences.

Though the initial results are limited and not statistically representative, Capstone Team H believes that a survey of this nature could and should be developed further and would be an excellent tool for the CPC, CPCIL, or other parks’ agencies to employ. The data that can be gathered from our youth workers and Canadian youth in general will be invaluable to the future direction of parks’ agencies and ensuring that parks remain an accessible place for all. The youth we surveyed demonstrated thoughtfulness in their responses and proved that the next generation of park leaders are already out there. The survey and resulting data can be utilized to support the development of a community of practice for youth to engage in park leadership, by offering an open safe space for dialogue, collaboration, and to encourage youth continuity and growth. 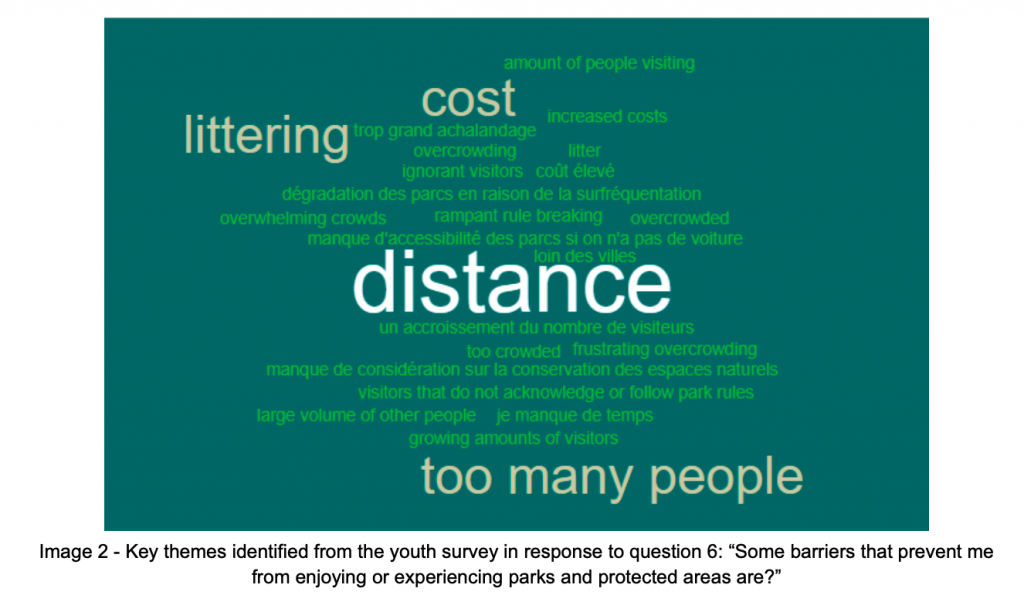 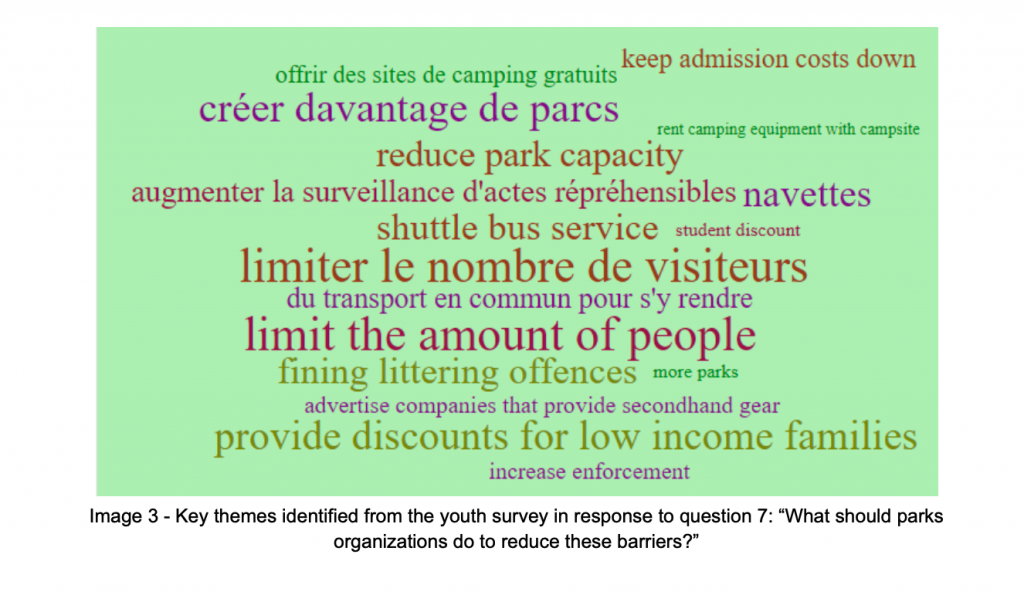 This post was written to report the work of Capstone Team F, one of the teams of Park Leaders involved in the Winter 2021 Park Leaders Development Program.

The federal and provincial governments of Canada have made commitments to advance reconciliation and renew relationships with Indigenous peoples based on rights, respect, cooperation and partnership. The road towards reconciliation is inevitably complex and difficult, and should involve the participation of all Canadians, on both a personal and professional level.

Every park, marine protected area, and heritage site administered by a parks organization in Canada is located within the traditional and ancestral territory of Indigenous peoples. This creates both an opportunity and a responsibility for parks leaders to advance reconciliation and foster respectful and positive relationships with Indigenous partners and communities.

Capstone Team F acknowledged that many non-Indigenous conservation staff, including at senior levels, have limited knowledge about how to develop cultural competency. While many staff want to learn more, they are often unsure where to start or become overwhelmed by the volume and complexity of resources, especially those designed for staff already experienced in working with Indigenous partners. As high-level discussions of reconciliation within parks continue to advance, there is a risk that the knowledge ‘ceiling’ may leave the ‘floor’ behind unless appropriate tools are available to help all parks employees develop baseline cultural competencies.

Capstone Team F’s goal was to create a collection of reconciliation-focused resources which allowed learners to proceed at their own pace. The resources were curated to allow for a natural progression from foundational learning on Indigenous communities and the impacts of colonialism toward constructive action to advance truth and reconciliation. To achieve this, the Team developed a user- friendly resource package, comprised of a thematically-organized database of resources and a suite of 12 learning pathways, all of which feature an organized set of resources centred around a particular theme. Most pathways are designed for learners with limited background of Canada-Indigenous relations, and each lists a Truth and Reconciliation Commission “Call to Action” which it aims to support.

The database and example pathways are by no means comprehensive, but provide a solid basis from which to begin a learning journey. The resource package may be used by supervisors to coordinate training sessions for staff (though it should never replace in-person training or the hiring of an Indigenous consultant), or it may be used by individual parks leaders for independent learning. The resource package is designed to develop cultural competency to help parks leaders advance reconciliation in their personal lives, in their professional relationships, and in their work. Above all, the resource package is intended to be a springboard for further learning, and to provide individual motivation for advancing reconciliation at a team, departmental or organizational level.

Recommendations for expanding the scope and increasing the impact of this work include:

Housing the database and learning pathways on a learning platform, such as the CPCIL website, where other users can continue to update the content

It is our hope that this Capstone project, and our recommendations for expanding the scope of the work, will contribute to existing efforts to advance understanding of Truth and Reconciliation in the public service. We have aimed to create a simple yet effective introduction to cultural competency, which may be useful to learners of all knowledge levels and spark motivation for a much deeper learning journey.